BIODIVERSITY OF THE “PRE-DELTA”, NATIONAL PARK.-Biodiversity can be understood by the means of two terms: richness and evenness. We study the biological richness of Pre Delta National Park (Entre Ríos, Argentina) on its floristic and ornithological, mastozoological and amphibian fauna. Pre-Delta National Park is located in the floodplain of Paraná River; almost all of its area is subject to annual flooding pulse.

This main stress is source of environmental heterogeneity, which is reflected in its biodiversity. 372 plant species, distributed in 68 families represent much more of the diversity found in similar areas of this portion of the River. 12 species of Anuran in 4 families are little less than the expected number of species, but new species are constantly been added. 202 birds species in almost 50 families found represents more than the half of all the Province ornithofauna. Mammals is the less studied group, having 16 species with 9 more of highly probable presence. Paraná River act as biological corridor merging, at this latitude, Amazonic, Chacoan and Pampasic flora and fauna. We suspect that the area is still under-measured, as the species/area or specie/capture unit relation is still in its incremental portion. 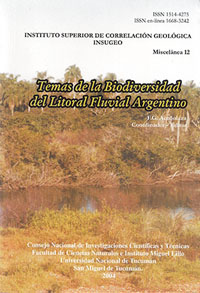